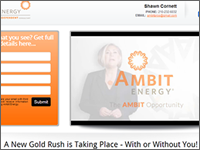 The Evolution & Future of EnergyGoldRush

Since the early days of Ambit when Damien and I experienced an unusual amount of success while not living in and (at least for the first few years) rarely traveling to deregulated areas, people always asked us the question, “How do you do it?”

The vast majority of what we do is the same as everybody else, but the secret weapon has always been EnergyGoldRush (EGR).

Before we look forward with a sneak peek at some of the super exciting you can expect to see with EGR over the next few weeks and months, we got to reminiscing and realized there were a few lessons in the evolution of how it got started and evolved into what we have today…

It started in January of 2007 as nothing more than a landing page I made for myself to make prospecting more efficient.  With some simple text about the opportunity and a form to collect prospects information before sending them to more information, it wasn’t pretty but it did the job I wanted it to do. As word got around, people wanted to use EGR for their own prospecting and so for a simple $25 setup fee to cover my time, I would manually replicate a site for anyone who requested it.

Throughout 2007 as more and more people requested EGR sites, we began to receive feedback that some aesthetic work was needed. The feedback was worded constructively, but the simple truth is that EGR was ugly. We spent a ton of time and some significant money giving it a face-lift and raised the one time setup charge to $35.

By 2010 the number of EGR had grown into the hundreds, we quickly realized the need to move EGR from a simple site that I manually created one by one myself to a replicating system similar to how Ambit replicates our distributor sites so that it wasn’t so time intensive.  Many thousands of dollars later we had our first major upgrade to the WordPress platform and at the same time the EGR landing page was redesigned to accommodate videos which had been a longstanding goal of my own and something highly requested by users. At this point we raised the cost to $50/year.

In 2012 we rolled out the second version of the EGR 5 Minute Video which improved upon the polish, delivery and content of the original.  We also rolled out a full length 18 minute presentation video.

In Late 2012 we made a hefty, 5 figure investment to completely overhauled the technology that runs and replicates EGR to a custom programmed platform giving us 100% flexibility to innovate and improve the system moving forward. In launching this new platform we offered one final opportunity to get an EGR site for a yearly discounted rate of $60/year.

January 1, 2013 began the modern era for EGR and with it the price went to $10/month. We’re very proud that with every major improvement and price change we always grandfathered in all subscribers so as long as you stay active, you will always pay the price you joined at. This means if you were one of those extremely lucky few in the early years who only paid a one time setup charge, you are good to go forever. If you are one of the very fortunate to be grandfathered in at a yearly rate of $50 or $60, you will always renew at that rate.

2013 has been a busy year with a number of improvements and upgrades, including…

2014 is going to be epic in terms of EGR upgrades and improvements.  Here is a list of what you can expect to see in Q1 alone…

2014 is the year to build it bigger, faster and have more fun than ever before!

Stay tuned, the upgrades we’ve hinted at will be rolling out very soon…

P.S. If you are on a yearly renewal, remember to keep your card up to date and EGR site active so you can continue your “grandfathered” status.  This way you will always renew at the discounted yearly rate you joined, which in most cases is either $50 or $60 per year versus the current rate of $10/month.